VMware Cloud on AWS enables customers to have a hybrid cloud platform by running their VMware workloads in the cloud while having seamless connectivity to on-premises and Amazon Web Services (AWS) native services.

VMware Cloud on AWS uses NSX to control access to this network as part of the SDDC management model, and limits access to only remote traffic required to support features like cross-cluster vMotion. On the top of the underlay, NSX builds overlay networks for logical VMware connectivity. Each SDDC has two types of overlay networks: 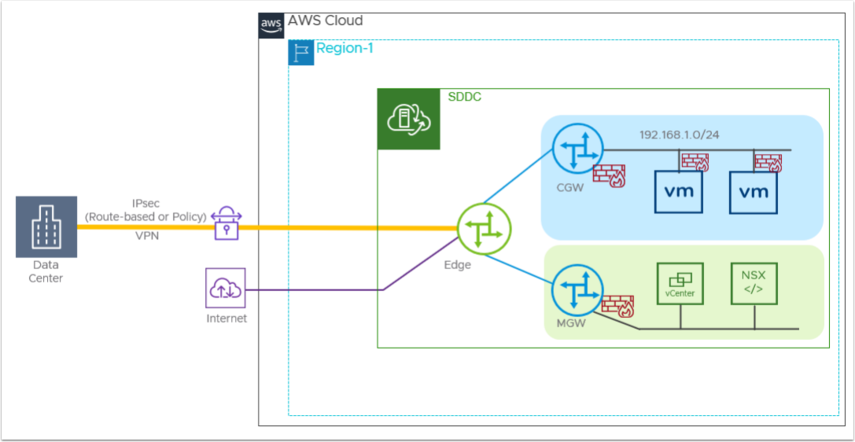 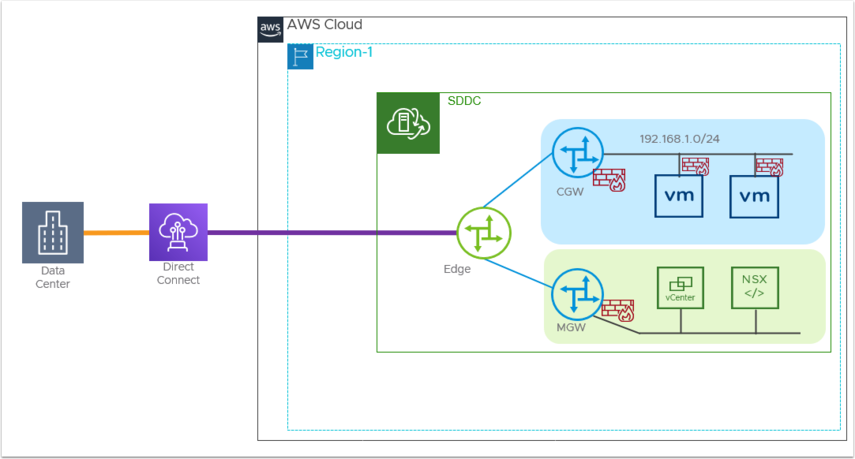 If you just want to use DX to access AWS services in a VPC you own, you can do so over a public VIF. You cannot use a public VIF to carry the same kinds of SDDC traffic (such as vMotion) that require a private VIF or Direct Connect Gateway.

The use of AWS Direct Connect is optional. If traffic between your on-premises network and your SDDC workloads requires higher speeds and lower latency than you can achieve with a connection over the public Internet, configure VMware Cloud on AWS to use AWS Direct Connect.

For this lab we will configure our On-Premises to VMware Cloud on AWS using Route-Based IPSec VPN. The On-Premises IPSec VPN Endpoint and session has already been configured.

A route-based VPN creates an IPsec tunnel interface and routes traffic through it as dictated by the SDDC routing table. A route-based VPN provides resilient, secure access to multiple subnets. When you use a route-based VPN, new routes are added automatically when new networks are created.

Route based VPNs in your VMware Cloud on AWS SDDC use an IPsec protocol to secure traffic and the Border Gateway Protocol (BGP) to discover and propagate routes as networks are added and removed. To create a route-based VPN, you configure BGP information for the local (SDDC) and remote (on-premises) endpoints, then specify tunnel security parameters for the SDDC end of the tunnel.

With A VPN setup between your On-Premises and VMware Cloud on AWS SDDC, you can begin to take advantage of Hybrid Solution Use-Cases, such as: